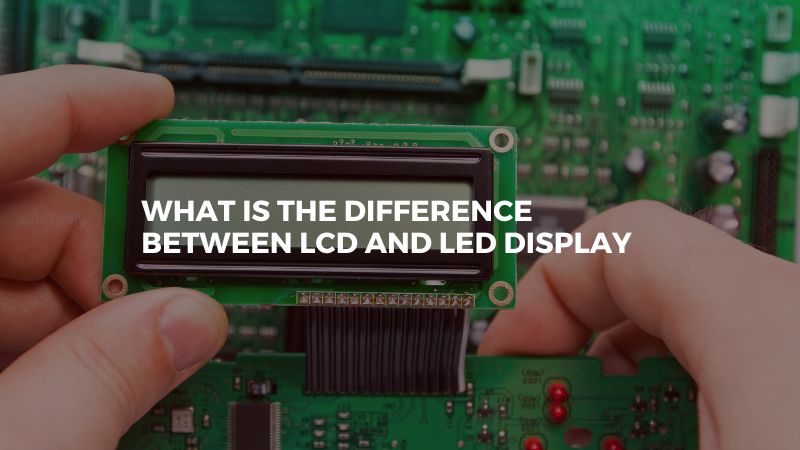 If you are in the display screen industry, you have probably come across the terms LCD and LED.

For many people, distinguishing these types of display screens in terms of performance, image quality, durability, or technology is always an uphill task.

Today, I will explain the differences between LCDs and LED displays.

Second, it is worth noting that all LED displays are LCD displays. However, not all LCDs are LED.

Unlike the LCD screen, LED displays has additional technology. Hence, work differently, as you will see shortly.

LCD technology uses cold cathode fluorescent lamps (CCFL). It is these CCFLs, which are responsible for backlighting and subsequently creating the picture you see on the screen.

Ideally, the CCFL is like a small fluorescent bulb.

Contrary, LED displays use light-emitting diodes for backlighting. As a result, create images you see on your screens.

Of course, to improve this technology, we have OLED displays (organic light-emitting diode displays).

Degree Of Contrast And Black Level

With an LED display, you will experience an accurate degree of contrast and black level.

The black color will be distinct and clear on the LED display screens. Of course, this is not the case in LCD displays.

In LCD displays, a small amount of light passes through the liquid crystals. As a result, the screen will not be totally black.

That is, you can dim each zone depending on your requirements. With the local dimming technology, you can quickly improve picture quality on LED screens.

You cannot achieve this feature with the cold cathode fluorescent lamp backlighting.

It refers to viewing images and pictures on either an LCD display or LED display from various angles.

Let’s break this down:

In LCD displays, you will realize that the contrast ratio tends to diminish at an angle of 30 degrees or more from the centre of the screen. Therefore, it implies the quality of images will begin to decrease (you will realize low-quality pictures).

This is not the case in LED displays. Whichever angle you view the screen, the image quality remains the same.

In short, LED screens offer a wider viewing angle. It is very critical when using LED displays for outdoor advertising.

Again, the position of the light source in the edge-lit LED reduces the viewing angle. In edge-lit LED displays, we can have light-emitting diodes along the bottom, top and bottom, left and right sides, or four sides of the screen.

The best part, direct-view LED display has evenly spread light sources on the screen. Consequently, it has a better viewing angle.

In short, by playing around with pixels in the LED screens, you can view images from any distance and angle.

With today’s advancement in technology, we have the RGB LED display. Of course, it is similar to the standard LED display.

The RGB LED displays have better color accuracy and consistency. Apparently, this is in addition to the local dimming capability I had explained earlier.

In short, unlike LCDs, you can achieve truer whites, true blacks, better picture rendering, and the best contrast with LED displays.

For the exact dimensions of a display, edge-lit LED displays consume less power than LCDs of the same size.

On the other hand, local dimming LED displays tend to use more power than LCD displays of the same size.

Well, this may sound more confusing.

The truth is, it will depend on the technology LED display uses.

You can learn more about LED display power consumption.

The standard LCD displays use cold cathode fluorescent lamps, which have mercury. Therefore, they are not environmentally friendly.

This is unlike LED displays which use light-emitting diodes.

Price Of The Display Screen

Size And Design Of Display Screens

Most LED screens are thin and lightweight than LCD displays. As a result, this gives the screens a sleek and elegant look.

Durability Of The Display Screens

In case of a fault in the backlighting of LCD displays, you will replace the entire bulb. This is not the case with LED displays, where you may replace faulty diodes.

As a result, it is easier to maintain LED screen displays.

As you can see, the main differences between LCD and LED displays are mainly in the backlighting mechanism. Incorporating LED technology has many benefits in terms of performance, image quality, and safety, among other aspects.

So, even though LED displays may be expensive, they are worth the investment.

If you ask me which display to go for, I will recommend LED.

What are your experiences with the LCD and LED displays?