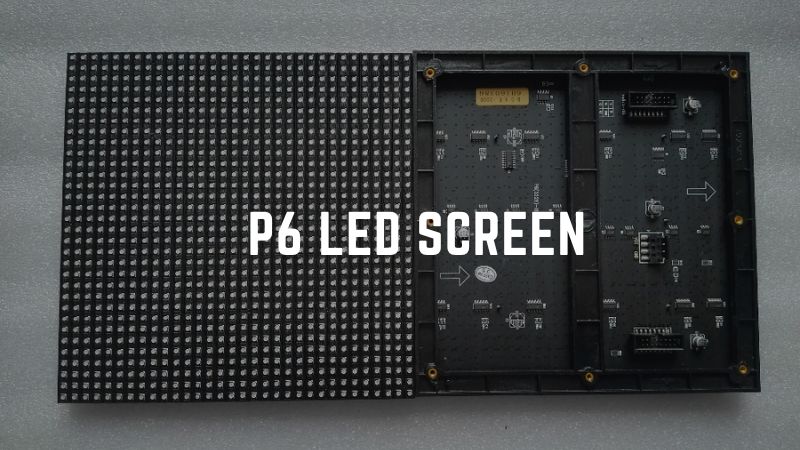 I know you are probably wondering why P6 LED screen is so popular. Or, you are not sure whether you need P6 display screen or choose an alternative option.

This guide will help you understand every aspect about these LED display screens. Whether you want to learn about pixel pitch, resolution, benefits or applications – all information you are looking for is right here.

What is P6 LED Display Screen?

In this display screens, the distance between the centers of any two adjacent pixels is usually 6mm. A reason they are called P6 screens.

Knowing Resolution Of A P6 Indoor and Outdoor LED Screen

The resolution of a P6 screen depends on the number of pixels that make up the screen. For instance, P6 screen with a resolution of 192×192 pixels has a total of 36,864 pixels.

How to Estimate Viewing Distance For A P6 LED Display Screen

For closer viewing distances, a screen with a smaller pixel pitch (such as P4 LED Screen or P3 LED screen) may be more suitable.

Uses Of A P6 Indoor and Outdoor LED Screen

These screens can be used outdoors as long as they are protected from the elements. Outdoor LED screens are typically encased in a waterproof and weather-resistant cabinet.

These LED screens are commonly used for advertising, stage shows, and video conferencing. They can also be used for other applications where a high-quality, high-brightness display is required, such as:

The lifespan of a P6 display screen depends on several factors, including:

On average, LED screens have a lifespan of about 100,000 hours of use.

How Much A P6 LED Display Screen Cost

The cost of a P6 LED screen depends on the size and features of the screen. A small P6 screen may cost a few thousand dollars.

On the other hand, a larger screen with advanced features could cost tens of thousands of dollars. Actually, you can find an P6 display screen for as low as 140 USD.

There are several benefits you will find with a P6 LED screen. These entail:

Despite having several advantages, a these LED screens will portray some limitations such as:

When you maintain a P6 LED screen, you are certain that it will serve you for a long time.

Some of the best maintenance practices you can perform include:

How P6 Screen Compares to Other Types of Display Screens

Here’s how they compare:

Compared to LCD screens, P6 display LED screens have a higher contrast ratio and faster refresh rate, which makes them suitable for displaying fast-moving images. They are also thinner and lighter than LCD screens.

When compared to plasma screens, P6 display screens have a longer lifespan and are more energy efficient. They are also thinner and lighter than plasma screens.

Compared to other types of LED screens (such as P4 or P5 screens), P6 screens have a larger pixel pitch, which means that the individual pixels are larger and more visible.

As a result, P6 screens may not be suitable for displaying low-resolution images or for use at close viewing distances.

The size of a P6 LED screen is typically measured in inches or meters. For example, a screen may be 4m x 6m, which means it is 4 meters wide and 6 meters tall. The size of a screen can range from a few inches to several meters, depending on the intended use and the available space.

1. How do you Test P6 LED Display Screen Quality?

You can subject these LED display screens to:

Of course, the screens should comply with RoHS, CE, UL, IP, and FCC manufacturing standards.

When it comes to the P6 display screens, we offer many options including:

As you can P6 LED screen is a practical option for all your indoor and outdoor applications.

A NSE, we have high quality and reliable LED screen display, depending on your pixel pitch and Nits brightness requirements – contact us now.

What Is Pixel Pitch – Source: NSE