If you want to advertise on a truck or a trailer, you’re in the right place. Check our latest design truck LED display and find your solution.

What is the led Trailer Advertising LED display?

● Any form of advertising is designed to grab people’s attention and inform them of the benefits of a brand and its products. Today’s mobile advertising technology is becoming very popular and trendy. Gone are the days of billboards, posters, and other traditional advertising mediums. These Ultra High Definition (HD) trailer LED screens are at the top of the list for outdoor and indoor advertising.

● If really want to influence people with a moving message, trailer LED screens give a whole new meaning to mobile messaging that attracts attention, interest and gets people to notice your advertisement. These trailer LED screens work perfectly as mobile billboards and can be mounted at a height to increase visibility and high brightness, making them easy to read and eye-catching even in bright sunlight.

● As road traffic continues to increase, you can ensure that your mobile trailer LED display is noticed by the large number of people commuting on the roads and driveways. These trailer LED digital screens are perfect for outdoor areas in shopping malls, fairs, historic buildings and places of worship, lounges, and airports. The smaller trailer LED screens are ideal for indoor spaces in shopping malls, public areas, museums, lobbies, events, and large gatherings.

● These trailers LED display can be used for advertising, signage boards, message boards, event calendars, and information announcements for people gathered nearby. With sun protection and a high-resolution UV coating to ensure a long life and optimal display, the larger LED screens display as perfectly as regular indoor displays.

● With a high 16:9 ratio and adjustable brightness options, your mobile advertising trailer LED screens can display your advertisements strongly and visibly. The advantages of LED screens are that they are bright, easy to see and they are easily noticeable. In addition, thanks to the large screen space and the hydraulically adjustable height, text and images can be larger, making them readable from a distance. These flexible options make trailer LED screens perfect for reaching the elderly and children.

What’s the advantage of the Trailer digital LED display?

● China’s leading LED display manufacturer – NSE LED offers trailer LED screens with a rugged design and grip, with multiple brightness and remote operation options. Look for lightweight models and screens that dissipate heat effectively. In addition, these screens are equipped with noise reduction technology and feature a modular design and recesses to support both indoor and outdoor use. Trailer LED screens can also be customized in length and width with height adjustable devices to cater for different advertising types and target spaces depending on usage.

● Trailer LED screens are more than 50% brighter than conventional display billboards and other visual display solutions, and ordinary products cannot overcome the problems of advertising in strong daylight. In this respect, it makes sense to use LED screens to engage your audience at all times. Not only are they more affordable and longer-lasting in the long run, but they are also more effective in reaching the target audience and spreading the message.

● With their bright and eye-catching display solutions, mobile trailer LED screens can help you promote your messages, advertisements, events on a large scale, day or night. With these trailer LED screens, take advantage of this LED technology and promote your business in a stylish way. You can also synchronize multiple LED screens horizontally or vertically to create a panoramic display experience for your audience.

● Stylish appearance, technological dynamism. Changing the style of the product lines, the traditional body is designed with borderless, simple lines and sharp angles, fully reflecting the modern sense of technology. Particularly suitable for events such as traffic control, performances, hipster shows, and electric vehicle launches. Optimal promotion of popular trends and cutting-edge technology or products and other media.

● The brightness can reach 10000nits. LED mobile displays installed outdoors will be affected by the outdoor weather.
For example, the sunny days and rainy days of the outdoor brightness is different, and the brightness of the display if not automatically adjusted, then on different days, the effect will be different and even will be greatly reduced.
In order not to affect the target audience viewing effect, outdoor LED display will have an automatic brightness adjustment function, that is, according to the outdoor weather conditions, automatically adjust the display screen brightness to achieve an excellent display effect. 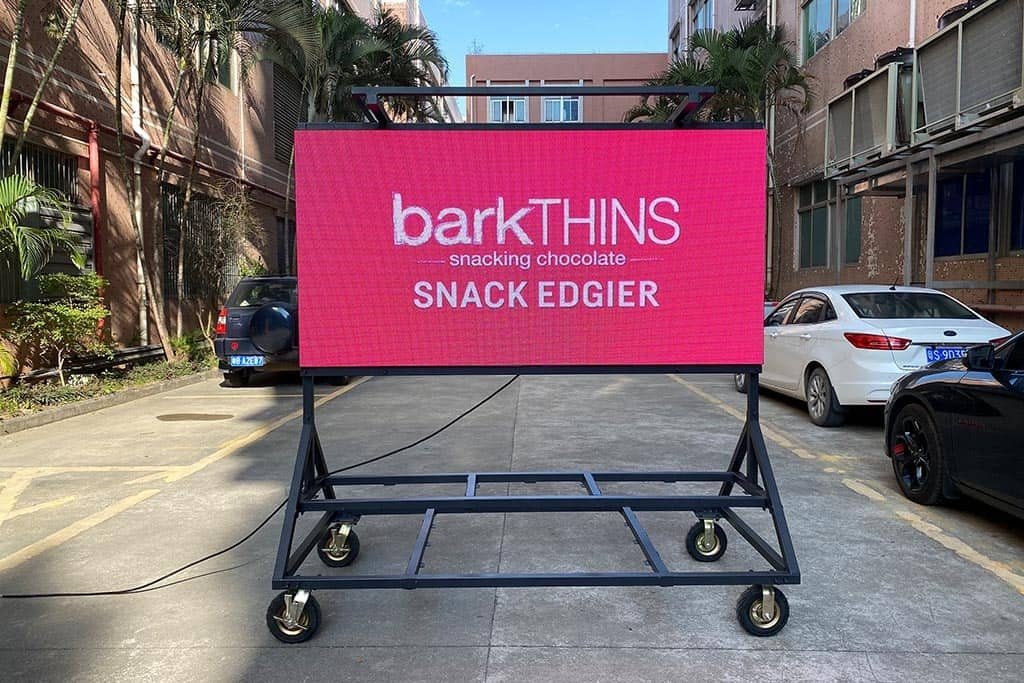 ● The Trailer mobile LED screen is not restricted by geographical location and can be used to advertise in any precise target market area that the customer requires, such as high streets, communities and trade areas.
According to customer needs can be shuttled back and forth to fixed routes throughout the day, or choose their own publicity routes, free from geographical constraints, with strong mobility, wide audience characteristics.

● Trailer signs is a new media that always attracts the attention and curiosity of consumers, so both companies and businesses are constantly looking for new media and new ways to market their products.
Companies often get twice the effect with half the effort when they place their advertisements in new media, and if they are accompanied by the combined ‘hype’ of advertising agencies, TV and newspapers, they will generate even more news.

What are the features of the LED advertising Trailer Signs? 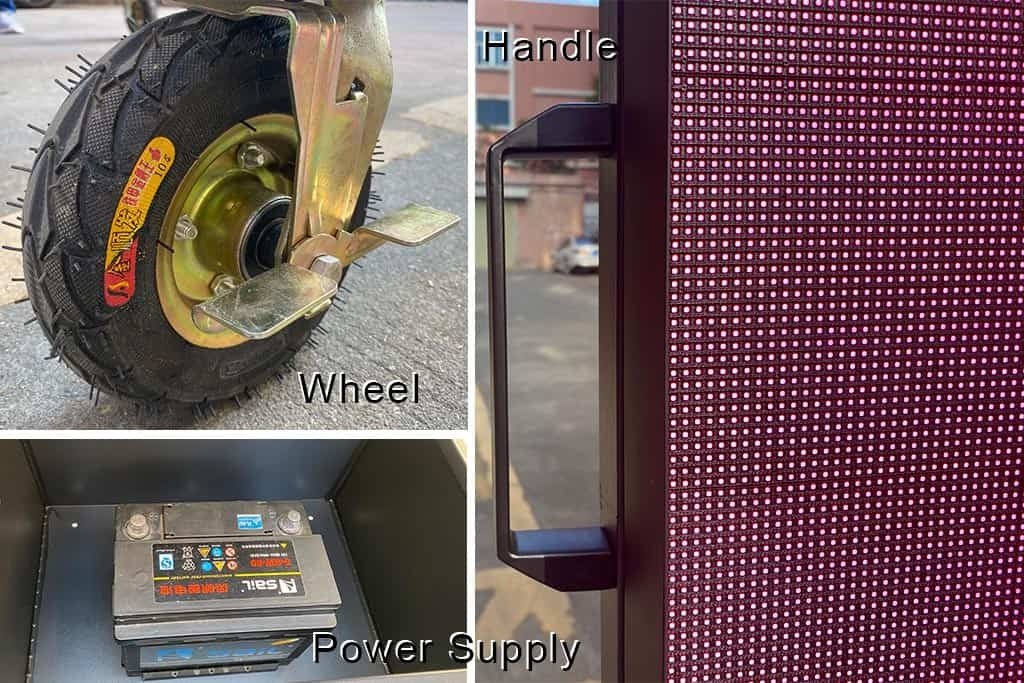 ● For the need to often move the LED mobile display, a single box can not be too heavy, which is mainly for the convenience of box splicing, handling, disassembly, and other operations.

● Waterproof and dustproof grade at least IP65, this is mainly because many performance projects are completed in the outdoor, and the outdoor is inevitable is rain and dust, IP65 above the level of protection can prevent rain or dust into the display screen body, thus effectively protecting the LED display.

● The power box of the trailer display should be easy to dismantle, and the power supply needs to be easy to replace. Because often disassembly, installation, debugging of the LED trailer sign display, the power supply have a certain loss, relatively speaking, the failure rate of the power supply will be higher than other components, the power supply box structure to do to facilitate the replacement is conducive to maintaining the long-term stable operation of the entire display.

What’s the application for the LED trailer display?

The development prospect of LED Trailer Displays in the whole international market. 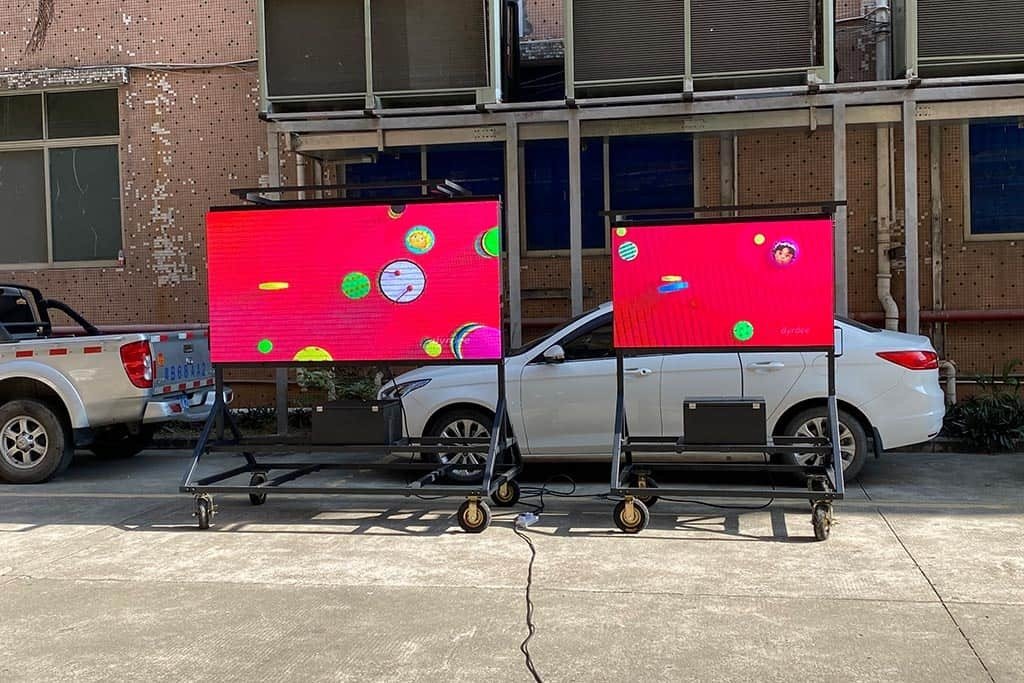 Advertising is an indispensable part of today’s society, from traditional TV and newspapers, gradually upgrading leaflets, mobile phones, outdoor, advertising has been pervasive, penetrating into every aspect of people’s lives. the intervention of LED advertising vehicles will break the previous pattern, so that people keep abreast of the latest social developments and business information, out of the road of differentiation, so that the use and role of advertising have been greatly enhanced.

With a new point of view, it is not bound to the previous format. In addition, LED car screen in the taxi and bus applications more popular, taxi LED display, bus LED display can be on the move to instantly display public transport information, advertising, news, weather, and other comprehensive information. It not only provides a higher level of service for passengers, but also brings significant revenue for operators, and is a high-tech product with technology, fashion, and great investment value.

The mobile picture is more visible and covers more target customers. LED advertising vehicles are mobile and can be shuttled through the streets, with two-way publicity of picture and sound, ensuring the publicity effect and the quality of publicity, which is also more easily accepted by the majority of consumers.