With the continuous development of the modern economy, people’s individual needs for LED displays are getting higher and higher, and the demand for LED displays of various shapes is also increasing.

① What is Flexible LED display？

● LED flexible display has the characteristics of thinness, lightweight, high pixel density, flexible display plane, low installation cost, etc., which can meet the requirements of various arcs, and provide a variety of screen sizes and definitions.

● There are many ways to install flexible LED display, such as floor type, suspension type, embedded, lifting type, etc., different installation ways to show the display effect is different.

② What is the advantage of Flexible LED display?

● The modules is soft and unique, the installation is convenient. It can be made into any shape according to the needs.
● High brightness: The brightness of the outdoor LED display is greater than 8000cd/m2. The brightness of indoor LED display is higher too, generally greater than 2000cd/m2.
● Large viewing angle: The indoor viewing angle can be greater than 160 degrees, and the outdoor viewing angle can be greater than 120 degrees. The viewing angle is very wide, which is convenient for the viewer to watch from multiple angles.
● Long lifespan: LED lifespan is more than 100,000 hours (ten years), and it is durable.
● The screen area can be large or small, as small as less than one square meter, or as large as hundreds or thousands of square meters, to meet various needs.
● It is convenient to interface with the computer and supports abundant software. It can play texts, pictures, videos, and other types of content and supports a variety of control card drivers
● The signal line and power line between the cabinets use fast connectors, which are convenient and quick to install. It can be used in conjunction with professional audio and video processing systems.
● The product supports a variety of signal inputs, such as DP, VGA, DVI, YPbPr, HDMI, SDI, H-SDI, etc.
● It can be applied to a variety of installation methods, such as hoisting, surface installation, etc; 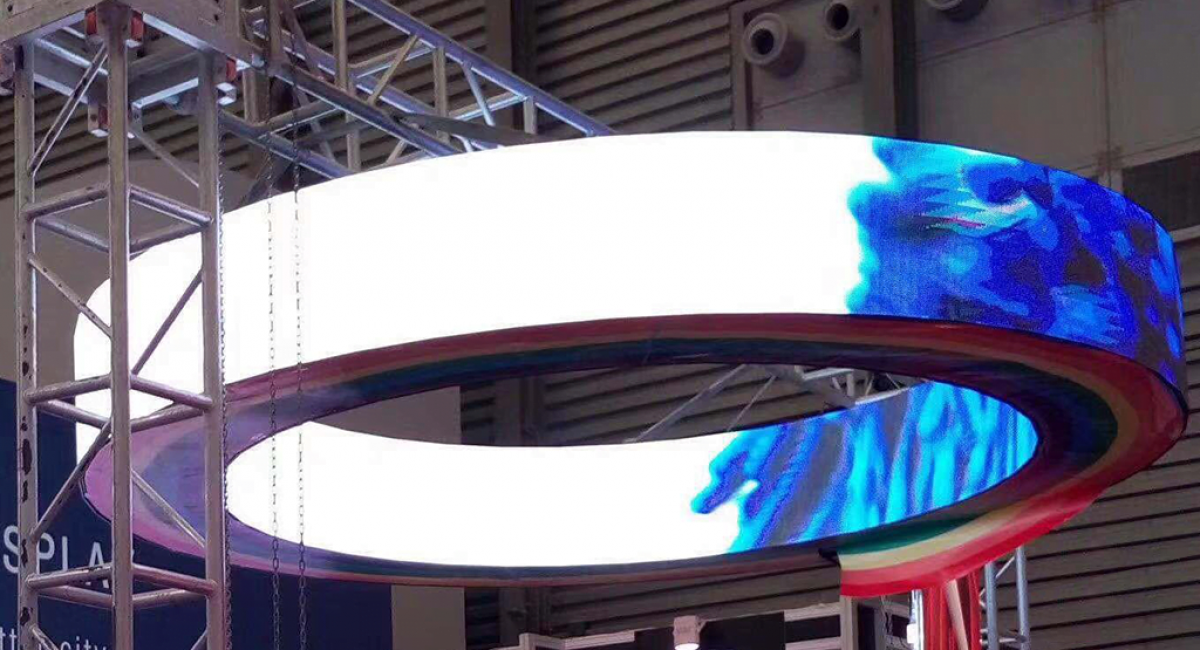 ③ What are the main shapes of flexible LED display?

● LED spherical screen
The LED spherical screen has a 360° full viewing angle and can play videos in all directions. You can feel good visual effects at any angle without the problem of flat viewing angles.
At the same time, it can also directly map spherical objects such as the earth, football, etc. onto the display screen as needed. It makes people feel vivid and vivid. It is widely used in museums, science and technology museums, and exhibition halls.

● LED DJ station
Over the past two years, LED DJ stations have become standard equipment in some top bars and nightclubs. The LED DJ station can match the DJ with the most dazzling effect, making the music and vision a perfect match.
By matching customized video, the DJ station and the large LED screen are integrated, which can be played independently, combined with the large screen, or superimposed to make the stage more layered.

● LED Cube Screen
The LED cube screen is usually composed of six LED surfaces combined into a cube, and it can also be spliced into geometric shapes in special shapes. A perfect connection with the smallest gap is achieved between the surface.
It can be viewed from any angle around it, getting rid of the look and feel of traditional flat display screens. It is suitable for installation in the atrium of a bar, hotel or commercial real estate, and can give the audience a new visual experience.

● LED strip screen
The display surface of the display screen is composed of several display strips, and this type of display screen has a large dot pitch, high permeability, and low contrast.
The emergence of LED special-shaped displays has broken the large-screen splicing system that can only be spliced into a rectangular shape. It can be spliced into various irregular shapes at will to display some highly creative content.
Not only can it attract the attention of the audience the first time to achieve better publicity effects, but also better expand the application range of LED display splicing.

● LED video logo
LED video signs are assembled with special LED modules of different specifications, which are not limited by the size of the screen, and can be flexibly assembled into text, graphics, and LOGO that customers need.
It can be applied to the roof of buildings, well-known enterprises, bank securities, municipal construction, landmark buildings, etc., which can enhance the commercial value of enterprises.

● Arc-shaped LED display
The display surface of the display screen is a part of a cylindrical surface, and the expanded view is a rectangle.

● Curved LED display
The display surface of the display screen is a three-dimensional curved surface, such as a spherical screen, a polyhedron screen, and a sky screen.

④ What do you need to pay attention to when installing a flexible screen?

Due to its own box structure, the LED display is very heavy when installed in a large area. The corresponding structural design should be considered for the installed display screen.

● Light Pollution
In recent years, with the development of science and technology, people’s requirements for environmental protection have become higher and higher, and the light pollution caused by urban lighting has also become the focus of people’s attention.

●With the development of LED display technology, all kinds of flexible LED display screens are slowly blending into our lives.

When the flexible LED screen came out, people were surprised that the original display screen could still be like this. There are different shapes, such as round, cube, cylinder, cylinder, and even human head.

With the advent of LED screens, the market will be more subdivided. Conventional LED screens can no longer fully meet the market requirements, because many more fashionable shops, hotels, bars, and stage designs all require distinctive designs to set off the beautiful scenery of the environment. Elegance will have the effect of attracting customers.

In addition to the daily display function, the aesthetics of the appearance has also been further improved, making it well adapted to the overall structure and use requirements of the environment.
It is understood that the current LED flexible display market is more biased towards users with special needs. With the gradual expansion of the application range, most of them are found in bars, performing arts, exhibitions, and other fields.

However, as people’s requirements for LED display screens increase, their application range is gradually expanding, and their effects are also extraordinary.

Flexible led displays have slowly poured into our lives, and its market potential is undoubted. Since the emergence and development of flexible screens, their development has gradually accelerated, improved and matured. It has slowly entered a period of overall steady improvement of the industrial structure and adjustment and perfection.